Modern Arnis is the system of Filipino martial arts founded by the late Remy Presas as a self-defense system.  His goal was to create an injury-free training method as well as an effective self-defense system in order to preserve the older Arnis systems.  It is derived principally from the traditional Presas family style of the Bolo (machete) and the stick-dueling art of Balintawak Eskrima, with influences from other Filipino and Japanese martial arts.

One of the characteristics of Filipino martial arts is the use of weapons from the very beginning of training and Modern Arnis is no exception.  The primary weapon is the rattan stick, called a cane or baston (baton), which varies in size, but is usually about 28 inches (71 cm) in length.  Both single and double stick techniques are taught, with an emphasis on the former; unarmed defenses against the stick and against bladed weapons (which the stick is sometimes taken to represent) are a part of the curriculum.

It is said that, originally, the cane was considered sacred by practitioners (Arnisadores), and therefore an arnis practitioner was expected to hit his cane at the hand or forearm of his sparring partner and not at the latter’s cane.  This had the advantage of being the preferred method in actual combat, referred to as “defanging the snake”, that is, making the opponent drop his weapon so that he is less of a threat.  However, it discouraged many would-be practitioners who found this training too painful and injury-inducing.  The result was that the Filipino martial arts became in danger of dying out; in most areas of the Philippines, Japanese martial arts such as Karate and Judo were much more popular than the indigenous systems.  Remy Presas’ modernization of the training method was intended to help preserve the Filipino martial arts.  He taught the method of hitting cane-on-cane during practice, which attracted more newcomers to the art and allowed the art to be taught in the Philippines’ school system.  “Defanging the snake” remains a principle of Modern Arnis, however, and in practical application, one would typically strike the hand or arm.  The technique can be used empty-handed, where it is known as “limb destruction”.

Training covers empty-hand self-defense (striking, locking, throwing, etc.) as well as the trademark single and double stick techniques of the Filipino martial arts.  Other aspects of the art include espada y daga (sword and dagger fighting), sinawali (double stick weaving patterns), and tapi-tapi (locking drills with the stick).  In addition to partner drills, Modern Arnis includes the use of anyo (kata), solo forms both with and without the stick.  Emphasis is placed on fitting the art in with a student’s previous training (“the art within your art”), smoothly reacting to changing situations in the fight (“the flow”), and countering the opponent’s attempt to counter strikes directed at him (“tapi-tapi”).  Practitioners are called arnisadors or Modern Arnis players.[6]

In addition to its Filipino influences, elements of Judo, Shotokan Karate, and Wally Jay’s Small Circle Jujutsu appear in the system. 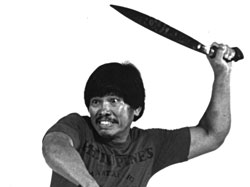 Remy Presas studied his family’s system from an early age.  He went on to study the Japanese systems of Shotokan Karate and Judo, achieving high rank in each; but he simultaneously studied a variety of other Filipino systems, most notably Venancio Bacon’s Balintawak .  Beginning with a small gymnasium in Bacolod in the 1950s, he attempted to spread the art to the local youth as both a cultural legacy and a form of physical development or sport.  He taught the art at the University of Negros Occidental-Recoletos.  His desire to reinvigorate interest in his country’s traditional martial art grew over time, and he began making modifications and improvements to what he had learned.  In 1969 he moved to Manila at the request of a government official, and formed the Modern Arnis Federation of the Philippines.  He continued to develop and spread his art, including via books, until political considerations forced him to relocate to North America.

There he met Wally Jay, George Dillman, and other martial artists who influenced his development of the art of Modern Arnis.  In particular, many locks from Small Circle Jujitsu were added to Modern Arnis.  The art continued to grow and change, in technique and in emphasis, though it always retained a focus on the single stick and on general self-defense.   Throughout the 1980s and 1990s he traveled extensively for seminars – the principal form of instruction in the system was through weekend training camps held around the world but especially in the U.S.  – and produced books and videos.  The International Modern Arnis Federation Philippines would come to be the lead Modern Arnis organization in the Philippines, and the Deutschen Arnis Verband of Germany would be the lead organization in Europe.  In the United States, the International Modern Arnis Federation (IMAF) was the principal organization.

Sadly, Professor Remy Presas passed in 2001.  The Masters of Tapi-Tapi titles were created to provide leadership and steerage for the IMAF following Remy Presas’ passing.  His legacy and art lives on in thousands of practitioners across the world and the leadership in the IMAF.

Sections of this page were sited from Wikipedia.org

There are no upcoming events.